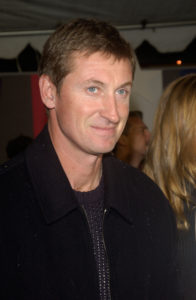 If you’re a fan of professional hockey, you would know for sure who Wayne Gretsky is. For a very long time, he has been considered the “Great One” in the National Hockey League. This is a serious title as the NHL is not only considered the premier professional hockey league in the world, it’s also one of the major sports leagues in the United States and America. So, now you’re probably asking, what makes Wayne Gretsky so great?

Born in Canada, Wayne Gretsky first started skating when he was only 2 years old. He had a very early start at hockey, which probably explains why his skills were always at a level advance of all his peers in all the leagues he ended up joining during his childhood days. By the time he was a teenager, it was no longer a question of whether he would make it to the NHL. It was only a matter of time and he was just waiting to turn 18 years of age to be drafted. When he did his first full season at the NHL at 18, he had conquered the hockey rink with his stats of 51 goals and 86 assists. With these impressive stats, he took home the Hart Memorial Trophy, which is the award given to the most valuable player of the year. That became a historic moment in professional hockey, as that marked the first time the award has ever been given to someone on his first year at the NHL.

In the years that followed, he was able to lead his team, Edmonton Oilers, to collect the Stanley Cup for four times. His stats also continued to soar high. In 1982, he was able to complete 92 goals and 120 assists. In 1986, he was able to set a record for 52 goals and 163 assists for a single season. These stats made him the only NHL player to surpass 200 points in a single season to date, which in turn made him the leading scorer in NHL history. This impressed the hockey world so much that many say that only Wayne could have single-handedly raised Edmonton Oilers from the mud at that time. Not only was Wayne known to be quick on the rink, he was also able to read the game very well. He was noted for how good he was at dodging the checks of the opposition’s players and was able to anticipate where the puck was going to be, so he could swing the right move. In fact, his signature move is to hide behind the net and make his passes from there. That area behind the net has later been coined as “Gretzky’s Office”.

Throughout his career, though, he was able to play in the NHL for a total of 20 seasons and his stats were always commendable all throughout. He was traded to Los Angeles Kings in 1988 and was credited for popularizing hockey in California. Because of his intuition to anticipate the next move, his ability to dodge checks and his unbeatable stats, he has then been called “The Great One” up to this day. Yet, the best part about his success is that he always remained humble and managed not to do anything to tarnish his reputation. He really is an exemplary sportsman that everyone should follow and look up to.