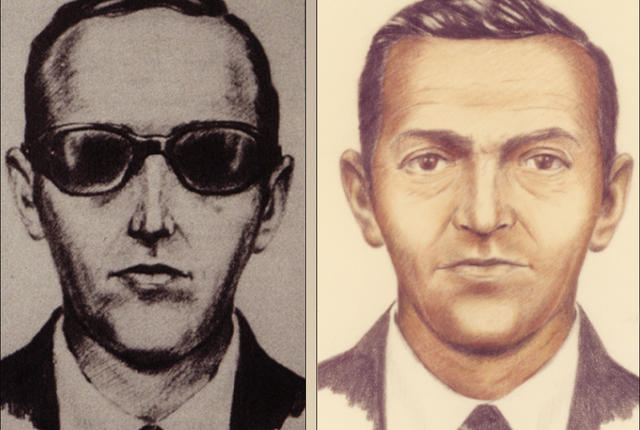 Is it possible that D.B. Cooper was a French Canadian?

For those of you who don’t remember, D.B. Cooper was a criminal who jumped out of an airplane with $200K in ransom money. A huge manhunt followed and all investigations came up empty. There is speculation that he died in the woods when he parachuted. And other theories that he was the most brilliant one time thief ever. Recently an article was published by Randy Boswell detailing a group of private citizens, with help and backing from the FBI, that have continued to study this mystery crime.

The FBI started the latest theory when back in 2009 the stated that it appeared the elusive criminal had fashioned his fake ID from a 60s French language comic book about a space traveler named Dan Cooper and a Royal Canadian Air Force test pilot.

The name that was reported after the incident, D.B. Cooper was actually a mistake by a reporter. It was later clarified that the mystery passenger had identified himself as Dan Cooper. This was the testimony of the flight attendant working on a Northwest Orient Boeing 727 on November 24, 1971 departing from Portland, Oregon. 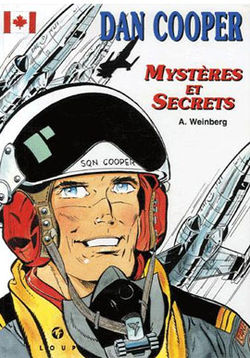 The comic book in question sold very well in Belgium and French Canada just before the hijacking. The comic depicts the superhero parachuting from an aircraft as pictured on the front cover.

The Portland to Seattle flight happened a little over 4 decades ago. The flight was going fine until D.B.Cooper jumped out of the plane during a rainstorm above the thick forest of the Pacific Northwest. He had just received a $200K ransom for US authorities.

This new group of sleuths call the “Cooper Research Team” is comprised of 3 civilian investigators who were given access to the FBI files. They presented their findings at the 40th anniversary D.B. Cooper symposium in Portland

An Idea From A Comic Book?

Some of the similarities to the Dan Cooper comic are undeniable. For example, one of the comic episodes included a ransom being delivered in a knapsack. That is exactly what the hijacker demanded 40 years ago.

The team examined D.B. Coopers neck tie that he left behinds before jumping out of the plane. His tie showed traces of titanium. Investigators thought this indicated he might have worked in a metal plant, or as a chemical engineer. He also asked for his ransom money in “negotiable American currency”. The sleuth s concluded that this was not a phrase an American citizen would use. Therefore, they believed their French Canadian theory was even more plausible.

But there are still so many things unexplained. “The Dan Cooper comic was only published in French, making Cooper’s unusual request very interesting,”

The team is quoted as saying, “Franco-Manitobans, the Franco-Albertans, and possibly the Franco-Ontarians” are most likely to have both a good command of French and no discernible accent when speaking English, since French Canadians living outside of Quebec “live in a predominantly anglophone environment.”

Their theory is they are looking for a Canadian citizen with military experience and knowledge of airplanes.

They continued. “He would have come to this country to work in or around titanium metal fabrication. He was a gentleman, well dressed and smoked cigarettes,” “Most notably, he probably lived a normal life and had one big problem that required about $200,000 in cash to solve.”

Although the case was still open it hadn’t been worked on until 2006 when the FBI used the 35 anniversary to retell his story. The interest from the public was amazing. The FBI calls it “one of our greatest unsolved mysteries.”

The FBI stated, “Even though our investigation has remained open, it doesn’t make sense for the FBI to commit substantial resources to this nearly four-decade-old crime,” “So if the public can help, by whatever means, maybe we can shake something loose.”

Details Of The Crime

If you don’t recall all the details of the story we’ll add them here.

The passenger, Dan Cooper, claimed he had a bomb in his briefcase after he boarded the Portland to Seattle afternoon flight. The plane landed in Seattle and he allowed 36 passengers to depart the plane in return for a $200K ransom delivered in a knapsack.

He then ordered the pilot to take off for Mexico. Not long after the plane was in the air he parachuted out the back door of the plan over thick woods (in the rain)

There are many experts who don’t believe he would have survived a late night jump in pouring rain into that thick forest.

Then again, nobody has found his body.

In southwest Washington state, in 1980, a child found an old discarded package of $20 bills worth about $5,800. Those bills matched some of the serial numbers from the ransom money.

There has been a lot of folk lore, legends and theories brought up over the years. There are movies, TV shows and a few novels written about the events.

Many people believe he planned and executed the almost perfect crime. If he was smart enough to use the money sparingly, it would never be traced.

Some people think he’s a hero.

The truth is, nobody knows the truth!

Here’s A Video About The D.B. Cooper Unsolved Case