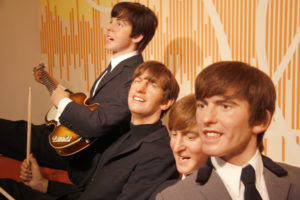 Back in the day, the British music scene has never been much of an excitement. But this all changed in the early 1960’s when four young lads from Liverpool started to make blues and R&B-inspired rock and roll that soon transformed the way pop music was to be experienced by large numbers of people. Shortly thereafter, the Beatlemania spread all over the world and the Beatles quickly became a cultural force and an icon. So, what exactly did the Beatles do that made them so popular? Was the band really that good or did they just really come in at the right place and at the right time?

In many ways, this four-piece ensemble from Liverpool couldn’t have chosen a better time to compose and record music. Their music greatly resonated to a generation that considered music to be a creative form of expression and a stylistic rebellion, especially as the height of their success also coincided with the American-Vietnam war and the hippie movement. Yet, it would be totally unfair to say that the Beatles’ success is nothing but good timing. John Lennon and Paul McCartney were extremely talented songwriters and composers, as evidenced in their hit singles such as “I Want to Hold Your Hand”, “Hey Jude” and “All You Need is Love.” The Beatles were also extremely ahead of their time – having pioneered the first music video and being the first pop musicians to focus on albums rather than hit singles.

But aside from their musical talent, the Beatles were also full of style and character. They were independent thinkers who did what they wanted to do, whether the world agreed with them or not. They also sported mop tops and made longhair for men a big trend in America. For the ladies, they were absolutely ‘crush’ material too. Not only did their British accents and unusual looks simply make them more attractive, it seems like the different members of the band also appealed to different teenage girls – what with Paul being the cute one, John being the smart and dangerous one, George being the shy one and Ringo being the goofy one. Needless to say, the Beatles definitely paved the way for a cultural revolution in the 1960s. Everything about the band – from their sound and their vision to their looks and their reckless abandon – just really appealed to the youth and pointed the future of music to the right direction. They were more than just songwriters and stage performers; they also took responsibility of their political influence as celebrities too.

In the end, the Beatles had a strong foresight and were simply doing things nobody else was doing. This is perhaps one of the biggest reasons why the band had such a longstanding staying power and continued to evolve as their audience did too. They transformed what the world knew about “rock and roll” in so many ways than one. Until this day, the Beatles still carry a tremendous influence to musicians of all genres, even if their glory days as a band have long been over.