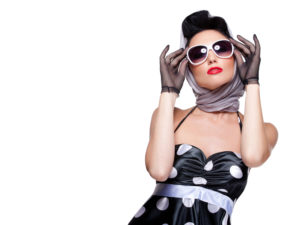 After the World War II had ended, a new era has come and everyone’s spirits were lifted. Not only did this new hope usher in promising changes in manufacturing and the economy, it has also revolutionized the fashion industry drastically. The 1950’s did not only see the birth of ready-to-wear clothing, it also saw the rebirth of major fashion houses such as Dior and Balenciaga in the haute couture industry. The decade also gave rise to new trends such as pastels and full ladylike skirts with very nipped-waist silhouettes, with the latter end of the decade acting as a springboard to 1960’s fashion that featured colorful shifts, loud prints and baby doll dresses. The funny thing about fashion, however, is that trends come and go but they never really go away completely.

If you were to ask any teenager growing up in the 1950’s, nothing screamed 1950’s more than a short-sleeve knit, a waist-cinching ballet skirt and sling-back pumps. Teenage males also embraced a more casual style to dressing as well. They were seen out and about sporting leather jackets, Levi’s denim jeans and Converse sneakers – all of which are all still around up this till day. And while we are not seeing the comeback of horse shoe collars, saddle shoes and coolie hats anytime soon, the 1950’s certainly foreshadowed what was to come in the succeeding decades. Yet, what seems to be the most defining fashion moment of the decade is the introduction of the sack dress by Balenciaga in the mid-1950’s. Shapeless in design and more comfortable in nature, this was a clear departure from the early 1950’s garb that sought to enhance a woman’s hourglass figure. And although many might not necessarily consider it a revolution, the prominence of the shapeless style certainly paved the way for a more liberated approach to dressing in the 1960’s.

By the 1960’s, baby doll dresses became in trend along with mod clothing that British “It” girl Twiggy seemed to have popularized. It is actually thanks to 1960’s fashion that women are now given the freedom to wear anything and everything to their liking – from miniskirts to knee-high boots, empire waists to “no waists”, and leopard print to printed stockings. All of these trends invented in the 1960’s, including the pantsuit, have certainly influenced fashion as it is known today, so much so that every woman reading this right now has probably owned at least one of these 60’s-inspired items in their lifetime. In fact, many of us still do and wear these items as part of our everyday attire.

Whether you’ve chosen a formal, fun or funky trend from these decades, it’s clear that these trends have been around for years and are here to stay. And as fashion repeats itself much like history, perhaps the most sensible thing to do is to develop your own personal style and evolve as you see fit. Once you do, whether trends you love or dislike come and go or not, you’ll always be wearing clothes that remain true to who you are.