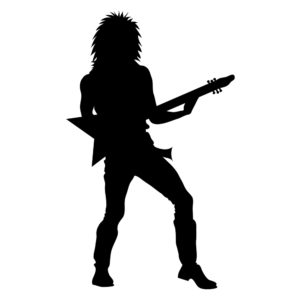 Rock music has really taken shape in the 1960’s, when the Beatles first appeared in the scene along with other newcomer bands that subsequently grew in tremendous popularity during the hippie movement. But it wasn’t until the 1980’s when rock music really became more defined and got split into multiple sub-genres. So, how did rock music sound in the 1980’s and what sub-genres had firmly established its place during the decade?

Starting in 1983, the decade really saw the revival of hard rock music, as evidenced in the success of bands such as AC/DC, Queen and Bon Jovi. It also saw the emergence of wildly popular hard rock bands such as Guns N’ Roses, which seemed to have been a fixture until the 1990’s. Yet, hard rock bands weren’t the only ones making a big comeback in the music scene. Bands that had started out in the early 1960’s also released new hits in the 1980’s, with Beach Boys and The Kinks breaking records with their singles such as Kokomo and Come Dancing. Popular punk bands in the mid-1970’s also came back to the scene, as well as the revival of the earliest form of rock music inspired by rhythm and blues.

Apart from these comebacks, new genres in rock also emerged during this decade. Bands such as Blondie, Talking Heads and Devo completely broke off from the punk movement and brought rise to a genre called new wave. Meanwhile, bands such as Metallica and Slayer also brought rise to a new style of music called trash metal that combined hard core punk with very heavy lyrics that dealt with issues such as anger, suicide and death. In this decade, new singers and songwriters such as Patti Smith and Bruce Springsteen also established their careers as rock artists. They made music that went beyond just entertainment and wrote heartfelt lyrics that focused on the everyday struggles of the American working class.

But what seemed to have been the biggest phenomenon of the decade is the emergence of alternative rock. Early American alternative bands such as R.E.M and Violent Femmes combined folk music with mainstream musical influences, with R.E.M later on proceeding to become perhaps one of the most successful alternative bands of the decade. Even if these alternative rock bands typically only have underground followings, occasionally they would release a commercial hit or an album that would subsequently receive praise in mainstream publications like Rolling Stone. And even if they never really generated impressive ground-breaking album sales, they do have a profound influence on future alternative musicians and laid the groundwork for their success. This led to the rise of alternative music movements in other parts of the world – from Los Angeles to Scotland, and all the way to Australia and New Zealand.

In the end, even if many say that the 1980’s were really not the most exciting decade for rock music, it marked the start of true creative expression in rock music. And by the start of the 1990’s, there are perhaps more sub-genres in rock than any other kind of music!