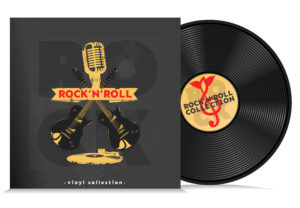 Rock music as you know today is not the rock music it was back then. From its rhythms and its lyrics all the way to the music scene it caters to, rock has definitely gone through an evolution, which is fascinating to follow along to. Let’s take a look back at the history of rock and roll, which started to grow in popularity only in the 1950s.

Rock and roll in the 1950’s could simply be described as blues with the sound of an electric guitar. It was Alan Freed, a disc jockey from Cleveland, Ohio who first coined the phrase “rock and roll” in 1951, as he was playing rhythm and blues music for a multi-racial audience to describe the kind of tunes he was playing. The phrase quickly caught on, resulting to a significant increase in American bands and artists who flocked to the recording studios to create their own rock and roll records. Artists such as Elvis Presley, Bill Haley, Buddy Holly, and Little Richard became the major pioneers of rock and roll in the United States. And just as the genre was taking off in the late 1950’s, a number of unrelated events seem to have given a sense that the era of rock and roll was abruptly coming to an end. These events included the departure of Elvis for the army, the retirement of Little Richard to become a preacher and the unfortunate death of Buddy Holly and The Big Bopper in a plane crash.

Thankfully, it was only a hiatus, as America and other parts of the world were soon introduced to the British invasion in the 1960’s; and it would only be fair to say that The Beatles band was perhaps the most popular band that dominated the British music scene and made the British invasion happen. The Beatles drew on a wide range of American musical influences including soul, rhythm and blues and surf music, but they put their own twist to it with high energy beats and invented a completely new style of rock music. It didn’t take long for the world to follow suit, and soon after, the Beatlemania had begun. Other hippy and psychedelic bands such as Pink Floyd, The Who, The Grateful Dead and Jimi Hendrix rose to popularity in this decade. Other genres of rock also began to emerge in the 1960’s. These include progressive rock, which was popularized by Pink Floyd, as well as folk rock, which was popularized by Bob Dylan and Janis Joplin.

After the Vietnam War had ended in April 1975, the rock and roll scene also calmed down significantly. It wasn’t until the late 1970’s when the world had witnessed yet again another huge movement in rock and roll – punk. The Ramones pioneered the genre of punk rock, having combined anarchism and teenage rage with rock and roll. This new genre definitely paved the way for many bands in the future, including The B-52’s, Talking Heads and Blondie, which grew extremely popular in the 1980s.

Apart from the rise of the new wave genre, heavy metal bands also rose in significance in the 1980’s. Bands such as AC/DC, Aerosmith and Bon Jovi were extremely popular for their power ballads and great guitar solos. Indie rock also started taking shape in the late 1980’s with bands such as U2, The Cure and The Smiths catching on among college students.

In the end, knowing more about the evolution of rock and roll in just a span of half a century only makes you realize that music evolves simply just as much as humans do.