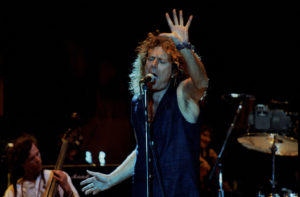 When you go to concerts now, have you ever wondered how they were done back in the day? Before the large scale venues came about, rock bands only ever played in small-scale venues. But as rock bands grew in popularity, as in the case of The Beatles and The Rolling Stones, the need for a bigger venue arose. This basically led to the birth of what we call as Arena or Stadium Rock and it all started with the Rolling Stones during 1969. They didn’t want the crowd to overpower their voices and made sure they could be properly seen and heard while they were performing.

From that point on, a lot of other rock bands such as Led Zeppelin, Pink Floyd, The Who, Journey, Aerosmith, and Kansas have followed suit, and it became a matter of who is performing in a bigger open-air arena or stadium.  This heightened the demand for Arena or Stadium Rock performances even more. From making sure the audience could hear and see the bands properly, it then evolved to the employment of state-of-the-art light shows and pyrotechnics to heighten the experience of the members of the audience. Now you not only come for the music but you also come for the shock and the awe the experience has in store for you. The music also featured heavy amplification and power chords that made use of over-the-top vocals to keep the audience mystified. In short, it became a show.

With Arena Rock now becoming more solidified in the industry, other bands emerged with the intent of making rock music suitable for a stadium performance. Examples of these rock bands include KISS and Queens that performed songs meant to encourage the thousands of fans on their midst to interact with them and somewhat contribute to their performance. They would ask their fans to clap or stomp while the music is playing and the vocals are being belted out. By that time, it was no longer only just a show, it was an interactive experience.

Yet, the popularity of Arena Rock only lasted until the early 1980’s, when the crowd’s interest already started to wane. This is maybe due to the novelty of going to stadiums losing its popularity and the emergence of other genres of music that now held their interest during their days. There was even a point halfway through the decade when it has been decided that a new form of entertainment was in order, which meant that the way people would experience music is soon going to change once again. Despite that, the baby boomers can surely attest to the nostalgia that was Arena Rock and say with 100% certainty that it was good while it lasted. Should you wish to be able to experience the same thing, in a smaller scale, dive bars featuring cover bands that bring their own equipment will surely do the trick. They even stand on the amps and speakers while they belt out the songs of the 70’s if you’re lucky!